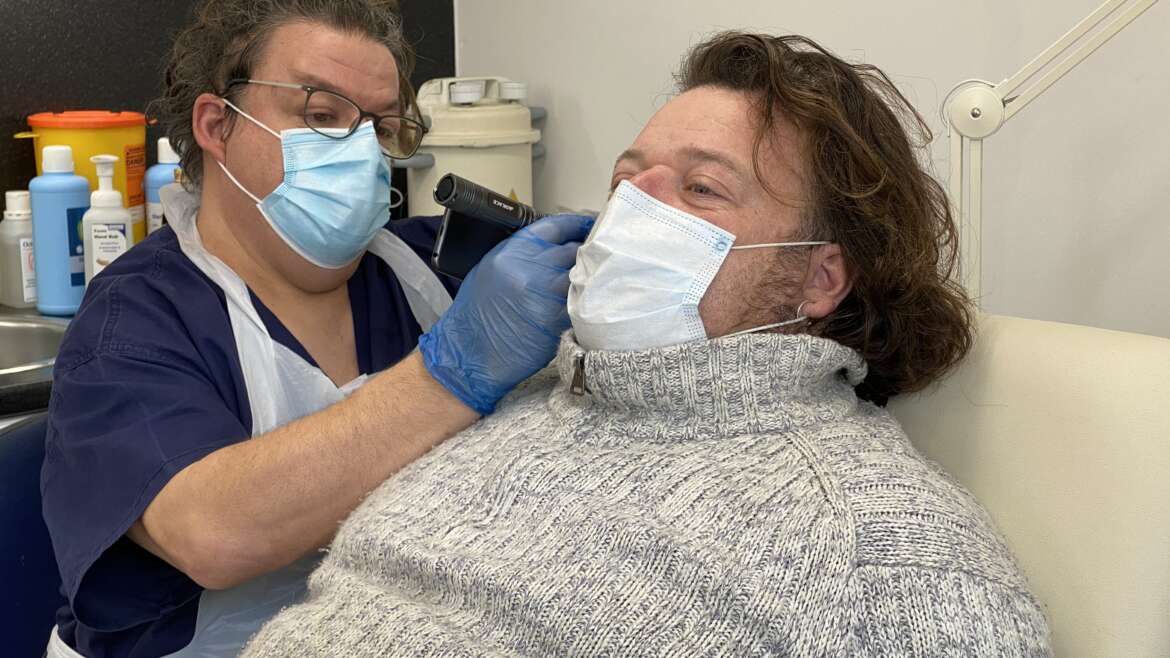 Hi I’m Darren and I have recently begun practicing as an earwax practitioner at Physio & Therapies in Todmorden.

Wednesday March 3rd is World Hearing Day and seems like a great time to tell you about my recent experiences and why I started to do what I do.

The theme of this year’s World Hearing Day is “Hearing care for all” and this fits well into why l started looking into ear care and wax removal.

My Dad lives in the Scottish borders . He is a very active and fit 75 year old who builds boats for fun, conducts a local concert band and sings in a Fisherman’s choir. Over the last18 months however, he was increasingly struggling to hear because of a build-up of earwax in both ears which had been diagnosed by his GP. Unfortunately, ear syringing from his Surgery was no longer available. He was experiencing increasing difficulty talking on the phone as he couldn’t hear the conversation and became more reluctant to use it. Our family are quite spread out across the country and speaking to him was becoming more difficult and frustrating for us all particularly in regards to Covid 19 rules when we were unable to meet up.

After the first lockdown last summer, he eventually decided to access a private earwax remover locally to him and after a very quick appointment, his earwax was removed and his hearing dramatically improved.

He was particularly impressed that he was able to see pictures of his blocked ear canal both before and after the treatment to show the difference. Now any reduced hearing that he has seems to be pretty much selective when he requires it!! He felt it was money very well spent and suggested that as a nurse, maybe it was something that I might look into.

Coincidentally, just after this, Lynne at Physio & Therapies put a post-up on Facebook asking if there were any local earwax removers who may be interested in setting up a regular clinic there, So, after some pretty extensive research – and disappearing down an endless rabbit hole of earwax removal videos on YouTube (look up audiology associates, you will either love it and become addicted (like my sister after I introduced her) – or hate it!!) I took the plunge and approached Lynne who kindly agreed to wait for me to undertake the necessary training. I did this late last year with an excellent training company in Macclesfield called Audiology UK. Who else can say they have spent their Saturday suctioning, irrigating and poking chopped up elastic bands out of a mannequins ear?!

Physio & Therapies then effectively sponsored my training by giving me free clinic time to allow me to assess and treat over 40 of my friends and acquaintances, invited through social media. It’s been a steep and interesting learning curve, I use a hand held video otoscope which utilizes an iPod touch as the screen – I have never used an iPod before and needed the input of my teenage kids to find some of it’s features! During the procedures, I hold the tools with my other hand – initially it was similar to patting your head and stroking your belly at the same time but this is improving all the time and I have become much more adept and skilled with this. It is unbelievably satisfying pulling out chunks of wax from ears and often seeing the increased hearing straight away of my patients – although it isn’t always so dramatic for some.

I offer a service inspecting the ear canal using the video otoscope which the patient can see and then earwax removal as required. I can use any of three techniques to remove wax and dry skin lodged within the ear canal.

Inserting oil or softeners isn’t usually required but occasionally, depending on the type of wax found, this may need to be treated for a few days and then  return to clinic. This is included in the consultation fee.

The theme of this year’s World Hearing Day is “Hearing for all”. GP’s are increasingly unable to offer wax removal at their Surgeries although, if impacted earwax becomes a significant problem. you may be able to get referred to local ENT  services. There is an increasing waiting list for this which has been significantly affected by the pandemic. I am happy to  offer another avenue for this treatment which also has a positive effect on NHS lists and waiting times.

According to the Social Care Institute for excellence (SCIE)  – “There is a strong link between hearing loss and dementia”. According to one study, people with mild hearing loss are twice as likely to develop dementia, and this increases to three times for those with moderate hearing loss. The reasons for this relationship are not clear, but communication difficulties may be one reason, as both hearing loss and dementia can make communication more difficult. Action on Hearing recommend that you should “get to know who to consult (for example a GP or a nurse) to examine ears for wax and to arrange it’s removal, where appropriate”.

I have also developed relationships with local audiology services who can advise on hearing tests, hearing aids and other services both via the NHS or privately. Modern hearing aids are amazing with facilities such as connecting directly to your television to allow personal sound levels and even connecting with your phone to take calls or to use your phone as a listening extension.

After over 30 years of acute nursing, mainly in Emergency departments, I have really enjoyed adding another skill to my skillset and find the impact on my ear patients extremely rewarding even if it is only to reassure people that their earwax is not a problem and can point people in the direction of other services.

Finally, on average, people who develop hearing loss wait ten years after they first notice symptoms before they seek help (SCIE). On World Hearing Day, consider “Hearing Care for all” for yourself, your family and your friends.

Following government guidelines regarding the opening up of certain business sectors, we are now able to conduct face to face appointments.

These will be subject to certain criteria that our governing body has put in place.

To arrange an appointment please email us at info@physiotherapies.co.uk or call us on 01706819464 or check out our reopening news